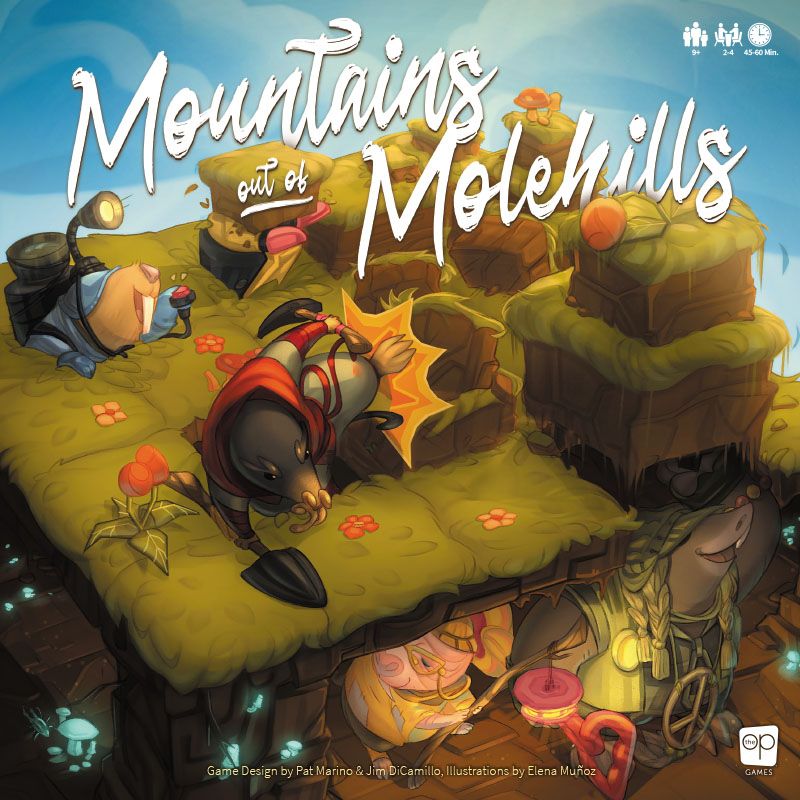 Moles have traveled from all over to compete in the annual Mountain Maker tournament. In this light strategy game, competitors show their skill based on how high they can pile their Molehills, and by how many Mountains they control. The Mole that can build and control the most Mountains out of Molehills over 6 rounds will be declared the “Top Tunneler” and win the game. Features a two-level game board and full-color acrylic standees for each Mole!

Mountains Out Of Molehills is played over six rounds, and each round has four phases. In Phase 1 players take turns drafting action cards from a face up market to form a hand of 4 cards each. These actions will move Moles underground while adding Molehill pieces to the bottom of the Mountains above them.

In Phase 2, each player simultaneously determines the order they plan to resolve their action cards, they place these cards face down in a stack from first action, to last. Once the order is set it cannot be changed! Carefully planning will help ensure you take control of the most valuable Molehills, but be careful as your opponents may block your path, throw a Rock in your way, or even cause your best Mountains to Topple over, spilling the pieces onto other Mountains!

In Phase 3 players take turns revealing the top card from their stack and resolving its action. In Phase 4 players score the round. Each player controls the Mountains that have their color Molehill on the bottom, and they earn 1 point for each piece in the Mountains they control.

After scoring, players draft the turn order for the next round, starting with the player who has the most pieces on TOP of each Mountain. The player who goes first gets first choice when drafting cards, but the player who acts last gets the final movement of the round.

After six rounds players total up all their points from the 6 rounds and the player with the most points is dubbed the Top Tunneler and wins the game!