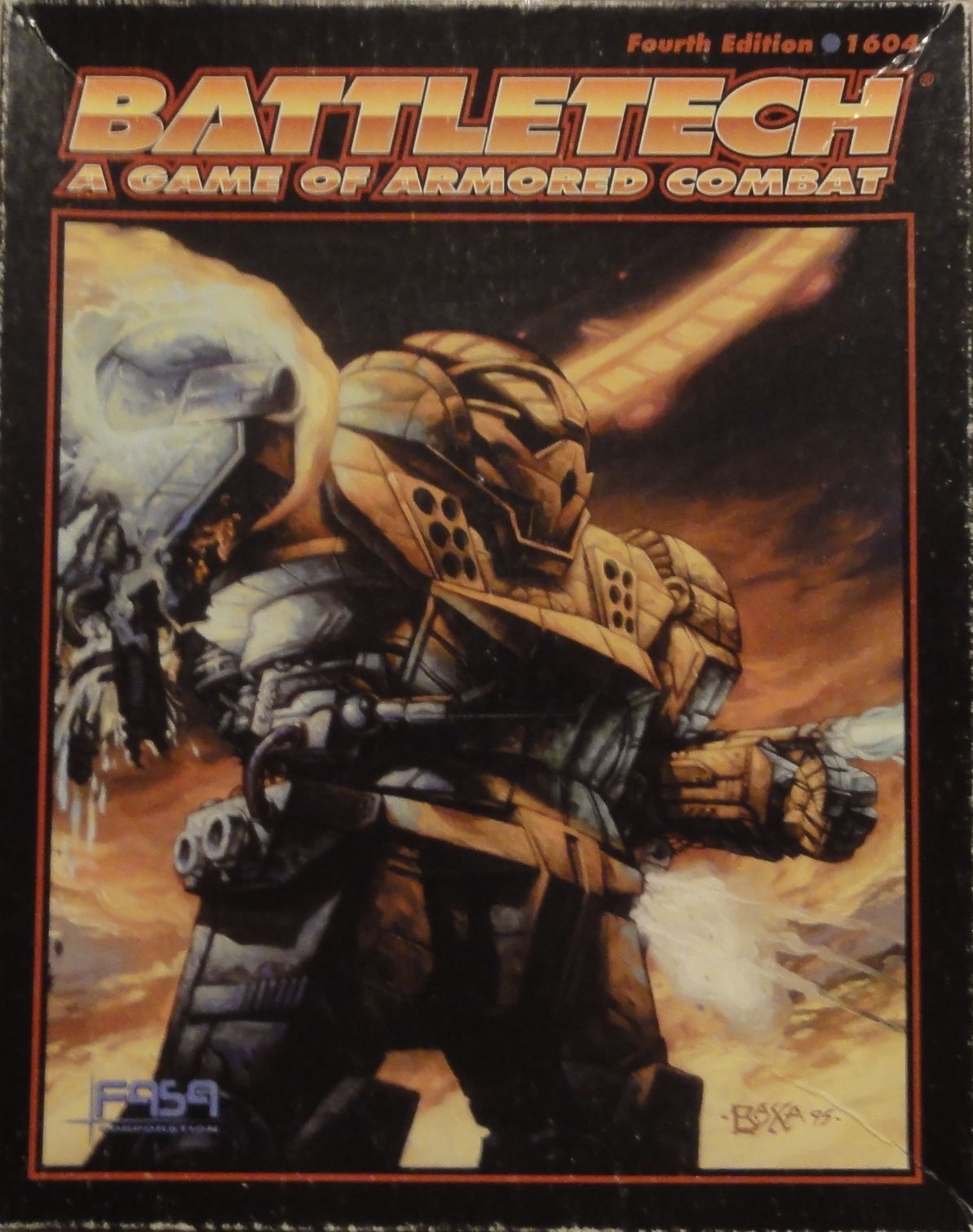 BattleTech (aka “BT”) is a science-fiction tactical wargame in which players battle one another with various war machines. The heart of the game is the “BattleMech” (aka Mech), a giant fighting robot; typical games have each player controlling from 1-4 Mechs. Vehicles, infantry, power armour, aircraft and other unit types also exist. The game system includes details such as varying weapon ranges, heat generation, and discrete hit locations (torso, arms, legs, etc.). Mechs vary greatly by mobility and firepower, and players can choose from provided designs or take the time to create their own Mechs from scratch. The game is typically played on one or more hex mapsheets or mounted map boards; optional rules are also available for hexless play. An extensive line of pewter figurines (Mechs, vehicles, and the like) are available from Iron Wind Metals. (Many earlier BattleTech figures were produced and sold by Ral Partha, which still handles the figure line in Europe.)

As in earlier editions of BattleTech, introductory box sets are available. The current versions are the BattleTech: Beginner Box (contains 2 plastic Mechs, a map, and simplified quick-start Mech rules). Designed to immediately follow this is the BattleTech: A Game of Armored Combat box (8 plastic Mechs, mapsheets, cardboard Mech standees, and the full rules for Mechs and basic gear). Lastly, the Battletech: Clan Invasion box adds further Mechs and maps and slightly expands the rules to include more advanced technologies and unit types, while moving a player forward through the game’s timeline.

The main component of the current generation of BattleTech is a series of rulebooks. The primary ones are either Total Warfare, which covers combined arms (Mechs, combat vehicles, battle armor, aircraft etc), or the BattleMech Manual, which continues on from the introductory box sets in offering more advanced but still Mech-only play. The rest of the current in-print rulebook line is covered below.

BT is also supplemented by a variety of Technical Readouts, which provide gameplay and background data on Mechs and other units at various time periods in the game-universe history. Accompanying these are pregenerated PDF record sheet collections, which have full gameplay statistics for each unit in a corresponding Technical Readout and are designed to be printed out for tabletop play. Also common are map sets, which add additional mapsheets for scenario variety; era-based sourcebooks detailing the history and factions of the setting; and the aforementioned miniatures (which are not required for play).

For about six years the game was known as “Classic BattleTech”, to differentiate it from the WizKids-produced collectible miniatures game “MechWarrior: Dark Age”. This branding has been long since abandoned and no longer appears on any products, but many BGG entries still feature it even if not applicable.