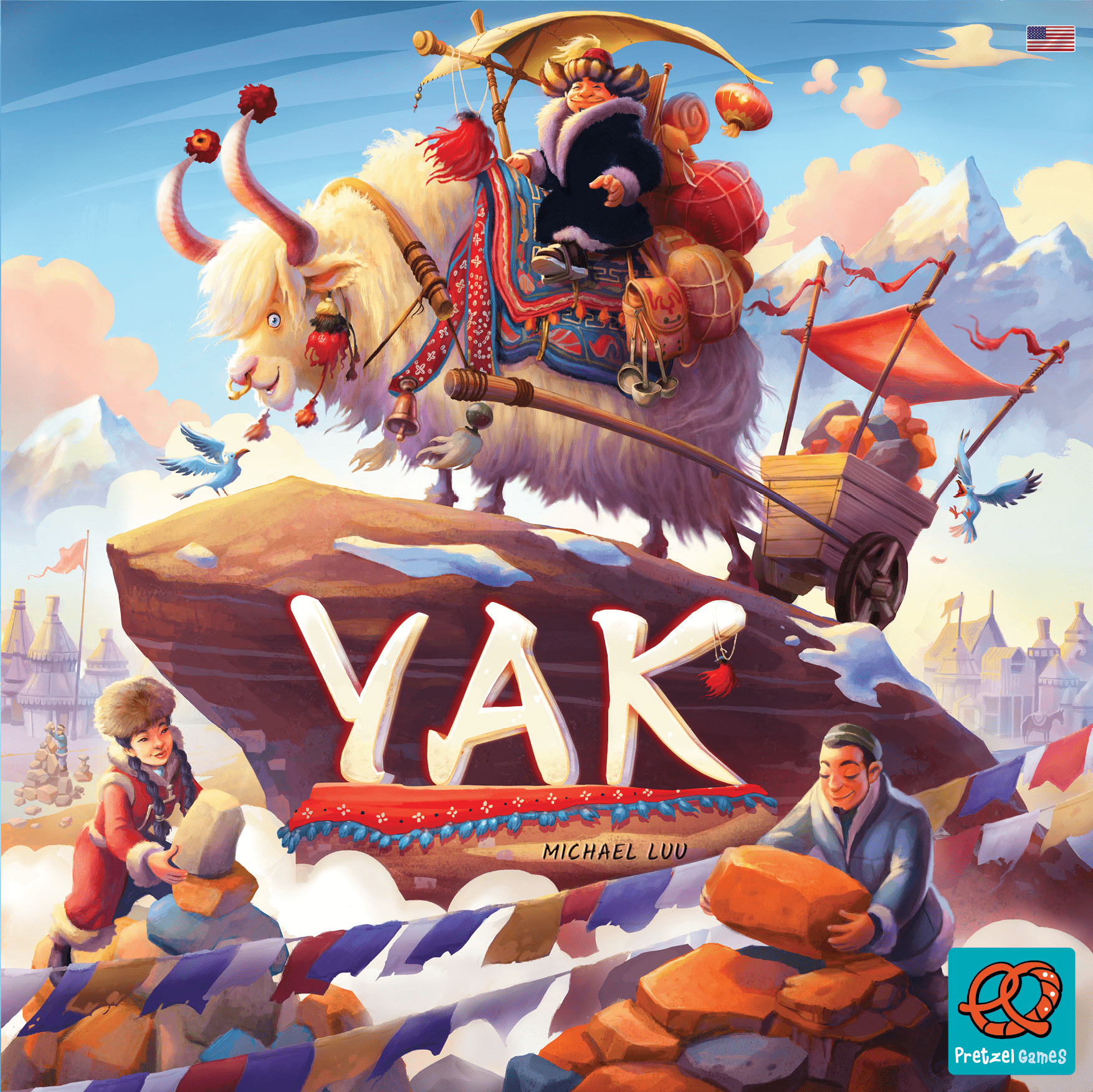 In Yak, the village elder has given you (and others) the task of constructing a great stone tower to guide the merchants and their yaks in the Himalayas. Each turn, a yak pulls its cart into your village. Will you find stones for your tower, or food for your reserves? Or will you need to visit the market to find what you need?

Over the course of the game, each player builds their own stone tower by acquiring stones from visiting merchants. You start the game with one good of each type (meat, milk, bread) and three cards in hand: build, restock, and market. Three or four carts being pulled by yaks start on the game board, with each player having one cart in front of them and each cart containing three stones and some food. Each cart has a restriction on it, e.g., “no bread” because its yak is gluten intolerant.

On a turn, all players choose a card in hand simultaneously and place it face-down. Starting with whoever holds the baby yak token, players then take their turns in order by revealing their card. If you played:

Build: Spend 1-5 food tokens, placing them in the cart in front of you, to buy 1-3 stones from that cart. You must follow the restriction on that cart. (No meat for the vegetarian yak, please!) If you acquire crystal stones, you must pay one extra food for each such stone. Place the stones in your tower, with all stones after your first needing to touch. Your tower is at most five stones wide.

Restock: Take all the food of one type from the cart in front of you and add it to your reserves up to your limit of eight items of food. Then draw a stone from the quarry bag and place it in the cart. (A cart can hold at most four stones.)

Market: Take two food items of your choice from the market, which starts with two foods of each type and which is refilled only when a cart exceeds its nine-food limit during a build action. Then draw three stones from the bag, place one in a cart of your choice, then return the other two to the bag.

Stones come in eight colors, with eight of each in the bag. Eight crystal stones are also in the bag, along with five fog stones. Whenever fog stones are drawn, all players reverse the direction of all the carts, then the active player sets the fog aside and draws replacement stones, with carts reversing again should fog be drawn anew. Once the right number of non-fog stones have been drawn, place the fog stones on the mountain track. This track will be filled twice during the game, after which only a single fog will remain in the bag.

To end a round, return your chosen card to your hand, move the yak carts one space in the direction they face, then pass the baby yak clockwise. Continue playing rounds until someone completes the fourth level of their tower. Complete that round, play one additional round, then score the towers. A crystal stone can be a color of your choice, but each crystal in your tower must be a different color. You score points (1) for each group of two or more stones (e.g., a group of six is worth 16 points), (2) for the number of groups of at least two or more stones, (3) for individual stones (only 1 point each), (4) for triggering the end of the game, and (5) for having the most remaining food.

For an additional challenge, play Yak with the “master builder” variant. Reveal three of the eight objective cards at the start of play. By having the most non-crystal stones of a color or placing them in certain locations in your tower, you score additional points.