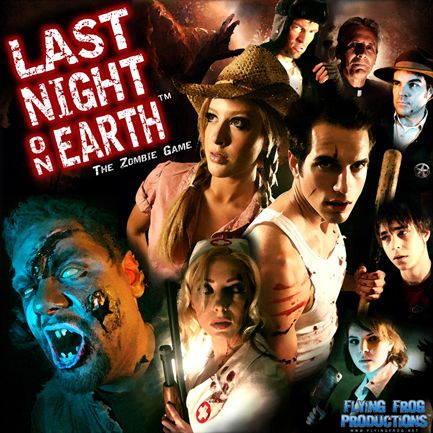 Last Night on Earth: The Zombie Game is a survival horror board game that pits small-town heroes head-to-head against a horde of zombies. A team of four heroes is chosen by one set of players, and the zombies are controlled by one or two players. Each hero has its own special abilities. The board is modular, which changes the layout of the town and start positions of each hero. The game comes with several scenarios, which include simple survival, rescue, or escape. Differing combinations of heroes, scenarios, and board configurations offer a lot of replayability.

A hero deck and a zombie deck deliver tactical bonuses to each side. Combat is resolved using six-sided dice, modified by the weapon cards with which heroes may be equipped. Many of the cards include zombie movie tropes to achieve a feel of playing out a horror movie. All the game art is photographic, enhancing the cinematic feel. The game also comes with a CD soundtrack of original thematic music.

Each hero has its own plastic sculpted miniature. The game also has 14 zombies in two colors. Other objects and effects are represented by high-quality cardboard counters.